From self-driving cars to self-flying aeroplanes, the automotive industry’s drive to bring greater autonomy and vehicles to market is spreading to the aviation industry. The next generation of aircraft will involve a greater use of technology in the cockpit, allowing the pilot to focus on tasks where human judgment, experience and skills are needed.

The EU-funded AS-DISCO project is working on a solution to reduce flight crew workload, improve pilot situational awareness, and support disruptive and innovative cockpit operations. Disrupting traditional aircraft design, the project’s main goal will be to automate cockpit procedure through the integration of innovative multimodal human machine interfaces (HMIs), which is the visual and audio portion of the cockpit display.

This proposal answer to the call proposal identified with the code JTI-CS2-2018-CfP09-LPA-03-17, which belongs to the European program Clean Sky 2. The proposal presents AS-DISCO project which main objective is to define and implement IMA concept for Audio Communications Manager.

This project will contribute consequently to the innovative and disruptive new aircraft cockpit concepts validation on LPA-Platform 3, by building an application for the integrated demonstrator, where several avionics innovative functions, as well to modern interface technologies, are being developed. Therefore, AS-DISCO project attends to Clean Sky aim to reduce flight crew workload, improve pilot situational awareness, and support disruptive and innovative cockpit operations.

To achieve the specific objective of this project that is in achieving TRL6 of the enabling software technology to meet the desired functionality during the integration on DISCO bench; AS-DISCO will consider Clean Sky targets such as integration within innovative multimodal Human Machine Interface (HMI), based upon visual, tactile, voice, … and innovative digital functions for audio management to deliver the necessary robustness, flexibility and versatility, and accommodate them for new generation of systems.

AS-DISCO proposed by AERTEC, is a software solution built on several ARINC-653 compliant partitions and based on the Publish-Subscribe communication pattern for the data and network packets routing. The functionality provided by the proposed routing solution will be based on the usage of statically defined routing tables to define point-to-point or point-to-multipoint communications data path. The AERTEC development AS-DISCO will be integrated with Remote Systems, such as HMI, cabin systems, etc. With only the need to update the static routing tables, the associated IDL and the inclusion of the corresponding operating system drivers.

Under the requirements and specifications stablished by the Topic Manager, AERTEC will be developed a serious of models to verify the correct behaviour and the system response to different scenarios using MBSE tools, firstly in TRL5 level. AERTEC will apply Test-Based-Model (TBM) and software-in-the-loop (SIL) methodology to the entire system. The modelling will also facilitate the development of “degraded mode identification”, “reconfiguration patterns” criteria and AFDX protocol.

After a decision gate (if GO decision) the model will be updated to TRL6 requirements and specifications, and the activities to perform the full functionalities of the AS-DISCO. Verification and validation process will be performed also in Platform3 System demonstrator. Evidences and results will be collected in a report to evaluate the maturity of the AS-DISCO development at TRL6 level. 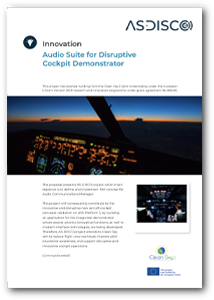 This project has received funding from the Clean Sky 2 Joint Undertaking under the European Union´s Horizon 2020 research and innovation programme under Grant Agreement n°: 865416.